Hello and Welcome to the Creation Station October Blog Hop!  I'm so glad you have landed here.  Our theme this month is "Whatever You Wannabe Stampin'" and we are each being inspired by one of the five Spice Girls. This is a fun hop so you'll not want to miss any of the design team's blogs.  Just click on the Next Button at the bottom of each post to hop around to each one.
I have to admit than I am of an age that doesn't know a lot about the Spice Girls. I don't know any of their songs, but I do know that one is married to David Beckham, the soccer player and friend of Gordon Ramsey, and that one was on Dancing with the Stars one season.  I also know all of the Spice Girl names courtesy of our fearless team leader, Elizabeth Price:  Ginger, Posh, Baby, Sporty and Scary.  So, which one did I pick?  It's October.  I picked Scary: 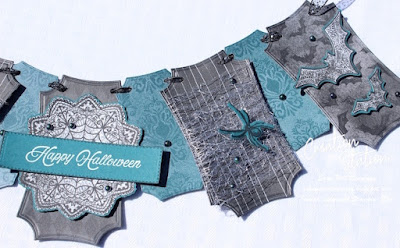 The spider image and "Happy Halloween" image are from the Hallows Night Magic stamp set (#153356/bundled with the dies at 10% off, #155188).  The spiders were stamped with Tuxedo Black Memento ink, die cut and then mounted on a web created by wrapping the 1-1/2" Silver Metallic Mesh ribbon around the flag.  The greeting was stamped in VersaMark, heat embossed with White Stampin' Emboss Powder, and die cut with an Ornate Layers die (#152726).
Iridescent pearls (#153549) decorate each of the flags.  The flags were strung together with Black Glittered Organdy ribbon (#147897) to form the banner.
This banner is headed out to my grandson for Halloween, but a banner without candy is not a good idea.  So, I decorated one of the Rectangle Tins (#153519) to coordinate with the banner: 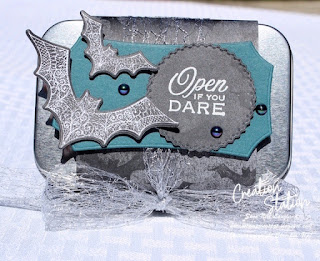 I used the same elements from the banner and adhered them to a belly band made with the dark bats designer series paper pattern and metallic mesh ribbon.  The greeting on this tin was die cut using a die from Tasteful Labels dies (#152886).
Let's head on over to Mikaela's blog to find out which Spice Girl inspired her:

To Mikaela's Blog . . .
Have a wonderful and spooky October! Sorry, Scary Spice, not wishing anyone a scary one!
--Sara Nell
at October 04, 2020

Email ThisBlogThis!Share to TwitterShare to FacebookShare to Pinterest
Labels: Magic in this Night suite 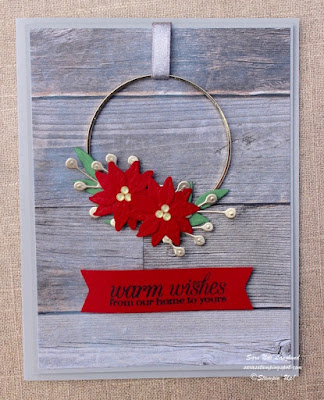 Sara Nell Langland
Hi! Welcome to my blog! I am Sara Nell Langland from Georgia. I have been a Stampin’ Up! demonstrator for over 17 years. I love sharing the creative fun of card making and paper crafting with people like you! My stamping style is rather eclectic. I let the stamp images speak to me as I create--sometimes I’ll go clean and simple, sometimes vintage, sometimes fancy with lots of layers. I do love watercoloring and creating fun backgrounds. On this blog you will see a lot of cards, some 3D items, home decor and a scrapbook layout now and again. I love sharing my tips, inspiration and process with you. I’m happy you’ve landed on my page and hope you will be inspired by my projects.

Sara’s Stamping Spot 2.0 is my personal blog. The content on this site is my sole responsibility as an Independent Stampin’ Up! Demonstrator. The use of and content of the classes, services or products on this blog are not endorsed by Stampin’ Up

All stamped images are copyright Stampin' Up!